This Spotlight features DRK-12-funded projects that are researching and developing innovations in astronomy and space science education. In his blog post, former DRK-12 PI Roy Gould discusses the increasingly blurry boundaries between disciplines on the frontiers of astronomy as well as the opportunities and challenges they create. 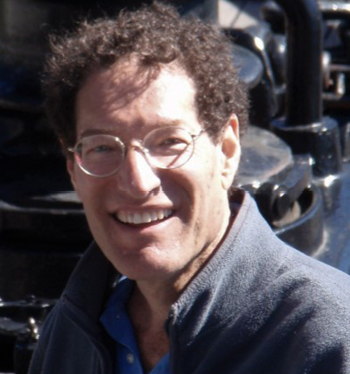 There's an old saying that interesting things happen at boundaries:  Where the land meets the ocean, great seaports arise. Where nation borders nation, new cultures and languages arise. And at the thin boundary where earth meets sky, life emerges.

But the search for life on other worlds — now the most exciting frontier in astronomy — is rapidly dissolving traditional boundaries of science. Biologists, chemists and physicists are working together with astronomers and geologists as a global team, intent on finding the first evidence for life among the thousands of solar systems that have recently been discovered. It is an area that is proving enormously useful for science education — yet one that also raises thorny questions about the future of teaching and learning.

A key benefit is that everyone can participate. Thanks to a variety of projects funded by the NSF DRK-12 program over the past decade, teachers and students in thousands of classrooms have been using online telescopes to detect exoplanets and to assemble a simple portrait of their alien world, including its size and distance from its star.  Using authentic spectral data of a planet's atmosphere, students can begin to look for simple molecules that might be evidence for life. These projects require students to apply basic concepts in physical and biological science. They are an example of "inverting the pyramid," i.e., beginning with big questions that students already own, and then using those questions to motivate and organize the relevant basic concepts. (Otherwise, as Shirley Tilghman pointed out, a student may learn all the basic concepts but never get to the top of the pyramid, to the big questions that got them interested in science in the first place!)

There are significant challenges to this approach, however. For one thing, high-stakes statewide exams do not easily accommodate interdisciplinary learning or current science. For example, if you download the last 80 years of NY State Regents exams in physics, you'll find them virtually identical; we teach to the existing tests. Remarkably, the recent physics and earth science exams do not mention renewable energy, or use the term climate change. Since every exam is in part an advertisement — a message to students about what is important and what the subject is about — it seems reasonable that our assessments should reflect at least some of the verve and scope of current science. Read More

Description: Students often encounter alternative explanations about astronomical phenomena. However, inconsistent with astronomers’ practices, students may not be scientific, critical, and evaluative when comparing alternatives.The purpose of our project is to facilitate students' scientific thinking when confronted with controversial and/or complex Earth and space science topics. We do this by introducing students to an instructional scaffold called the model-evidence link (MEL) diagram, where students weigh connections between lines of scientific evidence and alternative explanations. We have developed a suite of these scaffolds, including two covering astronomy and space science topics: (a) the preconstructed MEL (pcMEL), where students are given four lines of evidence and two alternative explanatory models about the formation of Earth’s Moon and (b) the build-a-MEL (baMEL), where students construct their own diagrams by choosing four lines of scientific evidence out of eight choices and two alternative explanatory models out of three choices, about the origins of the Universe. The pcMEL form is less autonomy-supportive, but quite effective for introductory use. The build-a-MEL form is more autonomy-supportive and even more effective. Astronomy is a popular but challenging subject, due in part to the complexity and abstract nature of the topics, not to mention the presence of alternative conceptions and misinformation. Opportunities for students to evaluate explanations about astronomical topics can improve their learning and the MEL scaffolds are one set of instructional tools that can help.

Findings: Recent research has revealed an advantage of the baMEL, compared to the pcMEL, but both facilitate (a) more scientific evaluations between lines of evidence and alternative explanatory models; (b) plausibility shifts toward the scientific explanatory model; and (c) increased understanding of astronomy and other Earth science topics (Bailey et al., in press; Dobaria et al., 2021; Klavon et al., 2021; Lombardi, Bailey, et al., 2018; Lombardi, Bickel, et al., 2018; Medrano et al., 2020). Additional results from qualitative and mixed-methods (qualitative and quantitative) analyses revealed that students’ discourse during group work suggested productive disciplinary agency was promoted via the MEL scaffolds (Lombardi et al., 2021), and suggested that students negotiated toward scientific consensus when using the MELs (Governor et al., 2021). These results support a burgeoning area of research advancing the notion that productive discourse and agency is necessary to prepare students to actively participate in a more civically-minded and inclusive society, with all playing a beneficial role in scientific and reasoned decision-making.

Product(s): The MEL project website (https://serc.carleton.edu/mel/index.html) is a verdant portal for all the instructional materials and resources that we have developed, including the new virtual MELs. This website also acts as a hub for a large amount of professional development materials developed for webinars and teacher summer institutes. The project has also been very productive in conducting meaningful research and practitioner presentations and journal articles. These are available at our research team's website.

Description: ThinkSpace Labs are free, NGSS-aligned curricula that teach middle school students the causes of seasons, moon phases, and eclipses. Students purposefully use a blend of hands-on models and computer-based visualizations to understand the interactions between the Earth, Sun, and Moon that lead to these everyday phenomena.

Research has shown that strong spatial skills are associated with success in STEM fields. One can imagine how this would be true for highly spatial subjects like astronomy. Consider, for example, the concept of lunar phases, which involves visualizing the complex, 3-dimensional motions of the Earth, Sun, & Moon system. To understand lunar phases, Earth-based observers of the Moon must simultaneously imagine how the Sun illuminates the Moon from the point of view of an observer in space. The connection between these two viewpoints is made using a spatial skill known as perspective-taking.

Happily, research also shows that spatial skills can be improved with practice. The ThinkSpace curricula are unique in that they provide embedded opportunities for students to practice and improve spatial thinking within the context of subjects that are already a part of middle school science standards, so additional time is not needed for out-of-context spatial skills training.

Findings: A total of 8 middle school science teachers and 877 of their students in Massachusetts participated in testing the ThinkSpace curricula. All students took written pre- and post-assessments that consisted of science content questions drawn from the Misconceptions-Oriented Standards-Based Assessment Resources for Teachers (MOSART) test bank (Sadler, et al. 2010) and a spatial skill assessment that measured perspective-taking (PT) skill (Liben, 2012). A subset of students (N=96) with a range of pre-test PT scores were chosen to participate in pre- and post- assessment interviews. Students who used the ThinkSpace curricula showed strong increases in science content knowledge regarding seasons (Cohen’s d=1.5, p<.001) and moon phases and eclipses (Cohen’s d=1.3, p<.001), and they showed a decrease in common misconceptions associated with these topics, for example, that Earth is closer to the sun in the summer, or that moon phases are caused by Earth’s shadow. Students also showed gains in their perspective-taking skill relative to a control group, and interviewed students showed improved spatial thinking, as demonstrated by their ability to correctly apply perspective-taking when using models to explain seasons and moon phases phenomena.

Educator Resources from Other DRK-12 Projects