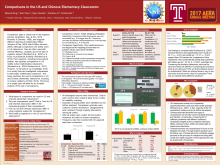 Purpose of Study: Comparison plays a critical role in the cognitive process (Goldstone, Day, & Son, 2010; Kotovsky & Genterner, 1996), and supports effective learning of mathematics (Ritter-Johnson & Star, 2009; Star & Ritter-Johnson, 2009). Although comparisons are widely used in US classrooms, they are often used with minimal efficiency (Richland et al., 2007, Richland et al., 2012). This study takes a cross-cultural perspective systematically examining comparisons in US and Chinese classrooms. We focus on inverse relations (CCSSI, 2010) allows for an in-depth analysis.

The goal of comparisons (“why”) might include similarities or differences involving a literal or structural level. However, deep learning only occurs when comparisons target structural information (Richland et al., 2012).

Comparisons can be made by teachers, students, or jointly as a class. Since effective learning calls for students’ thinking, it matters “who” makes comparisons.

The effectiveness of comparisons depends on prior knowledge (Ritter-Johnson & Star, 2009), and thus “when” comparisons occur (e.g., review, new lesson, or practice) is critical.

Methods: Our study analyzes 4 lessons on inverse relations from 8 US and 8 Chinese expert elementary teachers. All 64 videotaped lessons were transcribed and coded as follows:
1. Identified segments of discourse of comparison (episodes);
2. Analyzed five aspects for each episode: what, why, who, how, and when;
3. Quantified the qualitative data to identify aspect percentages,

Partial Results and Conclusions: Table 1 presents the results of one Chinese and one US teacher. We note the following similarities and differences.
• “What” All three comparisons were used in both classrooms, but the Chinese classroom contained more comparisons on different problems than solutions. This is different from the literature (Star & Ritter-Johnson, 2009), possibly because our targeted topic was different.
• “Why” Although both expert teachers focused on structural information, the Chinese teacher focused more on structural similarities; US more on differences.
• “Who” Comparison in the Chinese classroom always involved students, and were often suggested by students themselves. In contrast, the US teacher often conducted comparison for students.
• “How” The Chinese teacher asked questions on concrete representations (e.g., tape diagrams) to facilitate comparisons. The US teacher sometimes provided explanations without the use of aids.
• “When” Comparisons tended to occur during the Chinese teacher’s worked examples, whereas more comparisons occurred during US practice problems.

Scientific Significance: Our findings suggest that instead of making comparisons for students, it is important for teachers to ask deep questions about concrete representations in order to encourage structural comparisons by students.